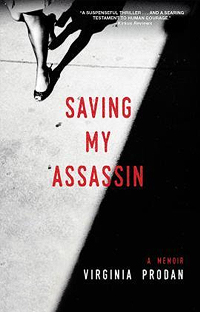 Saving My Assassin is a book that will keep you hooked from the first page up to the last and believe me, I don’t read much under the autobiography genre, especially a memoir. And to be honest I’m not really a religious person, I don’t pray much or attend church masses but that doesn’t mean I don’t believe in God and the possible things that faith in Him could do. This book astonishes me because it shows how a person could be so powerful and courageous when being guided by their strong faith in God.

The only thing that kind of disappointed me is when I took the book’s subtitle “I should be dead. Buried in an unmarked grave in Romania. Obviously, I am not. God had other plans.” LITERALLY. Yes, hahahah. I thought Virginia was indeed buried somewhere in Romania like what happened to Black Mamba of Kill Bill. *facepalm* But then it was just a metaphor—and that line could catch a reader’s attention, and be curious of the facts about how did she die? or how/where was she buried?. So spoiler alert: nope, Virginia neither died nor buried somewhere in Romania.

Moving on, at the last part of the book, there are twenty discussion questions. I’d like to try answering them all but I don’t think I’ll be able to answer some of the questions, I’ll still give it a shot. 😀

Virginia Prodan is an international human rights attorney, an Allied Attorney with the Alliance Defending Freedom, and a sought-after speaker. Exiled from Romania since 1988, Virginia currently resides in Dallas, Texas, where she enjoys practicing law, writing, speaking, attending the symphony and opera, and traveling. She has two daughters, Anca and Andreea, and a son, Emanuel.